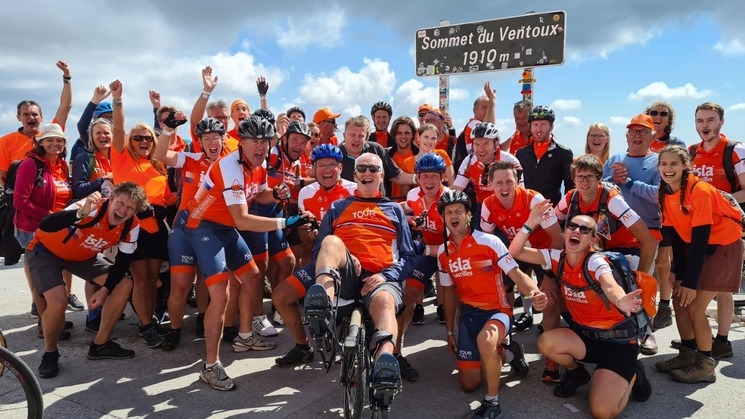 In the run-up to the anniversary edition of Tour du ALS, we let participants tell the story of their battle against the deadly neurological disease ALS. The stories are very personal, shining a light on the participants’ love of life and the small things that make their eyes sparkle, but also on the sorrow that comes with having to say goodbye. Despite the massive amount of uncertainty that ALS brings to their lives, all participants are actively making plans to have as many special moments of happiness with their loved ones as they can. This also goes for Chris de Heij, who plans to climb Mont Ventoux again in June.

We talk with Chris de Heij (59) at the beginning of the new year. Chris is no stranger to us since he has already participated in Tour du ALS twice before. In 2019 Chris climbed Mont Ventoux together with his partner Christa and a group of fifty friends and family members. That made him the first ALS patient to walk to the mountain top of the Mont Ventoux unaided. Last year, Chris took on the challenge again. He expanded his team to no less than sixty people who guided him to the top in a peloton surrounding his Hase Pino. “An incredible experience that I will treasure forever.”

You Never Walk Alone
Both times Chris’ team ‘Hope Against ALS’ ascended the mountain, they went up shoulder to shoulder, sharing the good times and the bad. When the song You Never Walk Alone, which has a very special connotation for many ALS patients, was played during the tour, many a tear was shed on the team. “It is a song that has become so important to me since my diagnosis. It represents the feeling and the fact that I never stand alone. It’s a tribute to all the beautiful people who literally and figuratively walk with me down this increasingly difficult road of ALS!”

Watch the documentary on Hope Against ALS during the tour of tours in 2019:

We walk on, with hope in our hearts
This year, Chris is again planning to reach Mont Ventoux’ summit. “It’s going to be my last trip to the top, although I’m not even sure if I’ll still be here in June”, he writes on WhatsApp. Due to muscle weakness Chris is no longer able to write and talking is getting increasingly difficult. He therefore answers our questions by typing with his eyes, which is also a completely new experience for the interviewer. The story that unfolds is the impressive tale of someone who, despite the odds he is fighting, still tries to keep enjoying life together with his family.

Giving up is not an option
“Let’s just do one more!” This heartfelt cry was the opener on the invitation Chris sent his family and friends in which he asked them to join him on Tour du ALS again this year. “My heart is good to go, but my body is protesting more and more.” Chris is not sure if he can find the strength to do it again. How will he be feeling at the beginning of June? Will he physically be able to travel all the way to the south of France and complete the journey to the mountain top of the Mont Ventoux? Nobody knows, but quitting is a word that is not in Chris’ vocabulary.

A gradually shrinking world
“I find that I enjoy having something to look forward to. Just thinking of it boosts my adrenalin and gives me new energy. Knowing that I’m going to participate on the 9th of June is a spot on the horizon, a goal for the coming six months. I find that I need goals now that my world is gradually shrinking. With that in mind it’s all very clear to me and I have made my decision: yes, let’s just do one more, even though it will undoubtedly be my last.”

The original heroes
As soon as the decision was made, Chris asked a few ‘indispensable’ people to see if they could help him prepare for the event again. Harry Weck, Dolf Straver, Leon, Jos, Linda and of course his love Christa. Each of them played a crucial role in organising things for Chris in the previous editions. “Without them, it would certainly be a ‘no go’, because I can hardly do anything by myself anymore,” says Chris. He also reaches out to a few people to see if they can take up his daily care during Tour du ALS. “So that Christa can also have a bit of a holiday for once.” 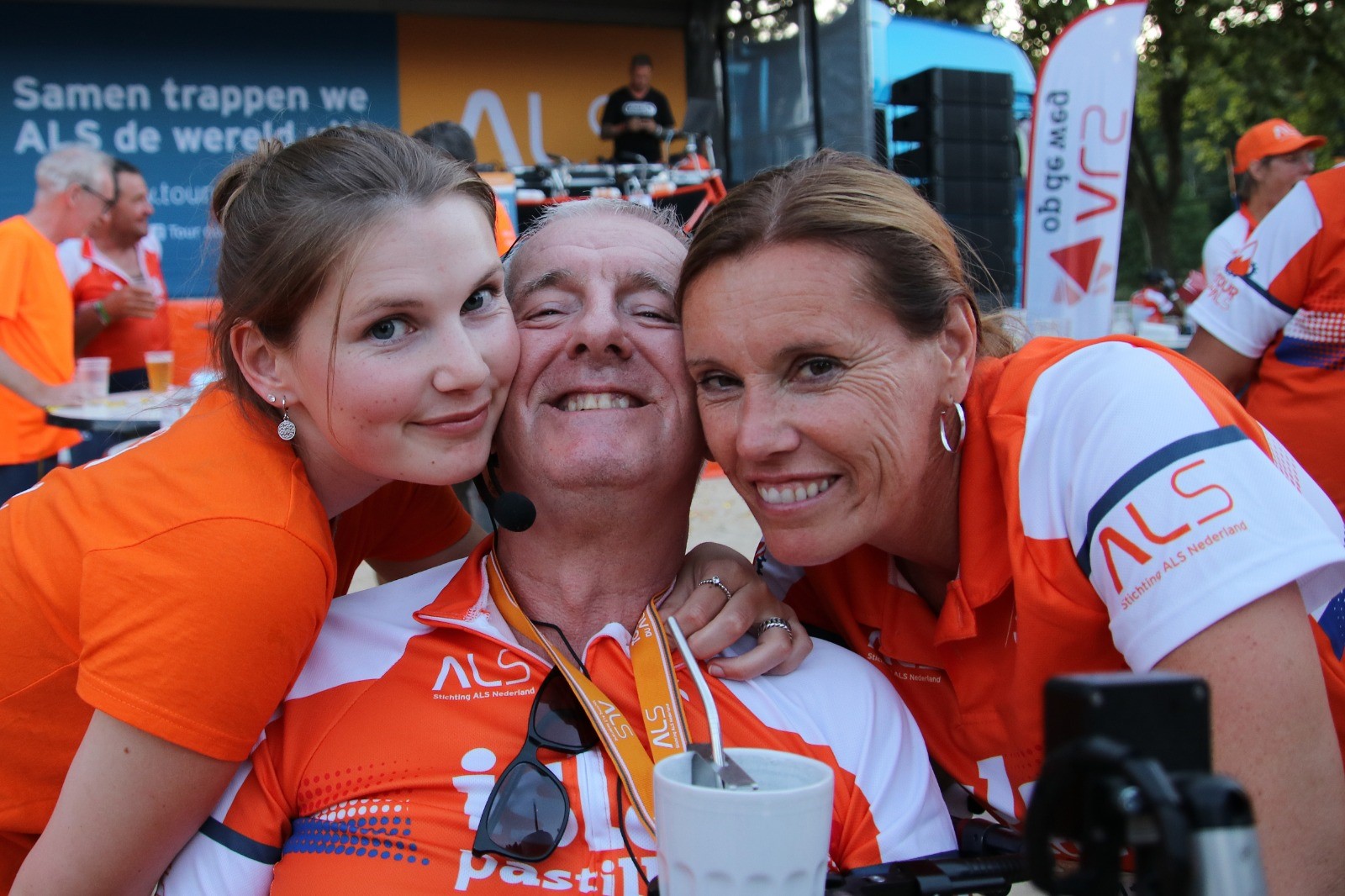 Green light
All of his original heroes answered Chris’ question with a resounding “yes”. And honestly, it couldn’t have gone any other way with friends like these, who are always there for Chris when he needs them. So, this year, they will take care of the organisational side of things again and that is a weight off Chris’ shoulders. With two extra caretakers joining the team, the question of who will provide Chris’ daily care has been crossed off the list. Getting Chris there will also not be a problem, because the Ambulance Wish Foundation has stepped up again! This means that there is a green light for all the consecutive steps.

Lonely in large groups
For years, Harry Weck has been Chris’ right-hand man when it comes to organising accommodation in Malaucène, the French village where Tour du ALS starts and finishes. A lot of work goes into finding the right place, because not every accommodation is suitable for ALS patients. One of the first things Harry asked Chris was how many people he was planning to bring this year. After pondering this question for a long time, Chris answered: “In previous years, it was wonderful to travel with a such a large group of supporters. But actually, this year, I don’t feel comfortable with the idea of having to interact with so many people anymore. It’s too much. I drown in all the sounds that I’m not able to process and I find that I feel lonelier in large groups than in small ones.”

‘Every moment matters’
When Chris, who had always been very fit, was diagnosed with ALS in 2018, it was a huge blow for the De Heij family. “When you’re diagnosed with ALS, there is only one thing that is truly important: to celebrate life with the people you love as much as you can and to make all the lasting memories you can, for yourself and your loved ones. Participating in Tour du ALS has made an indelible impression on both myself and all the people on my team. All that warmth and a true sense of unity. Joy and sorrow come together during this event. Shortly after my diagnosis my bonus daughter Marit had ‘every moment matters’ tattooed on her arm. Well, participating in Tour du ALS provides you with countless moments that matter.” 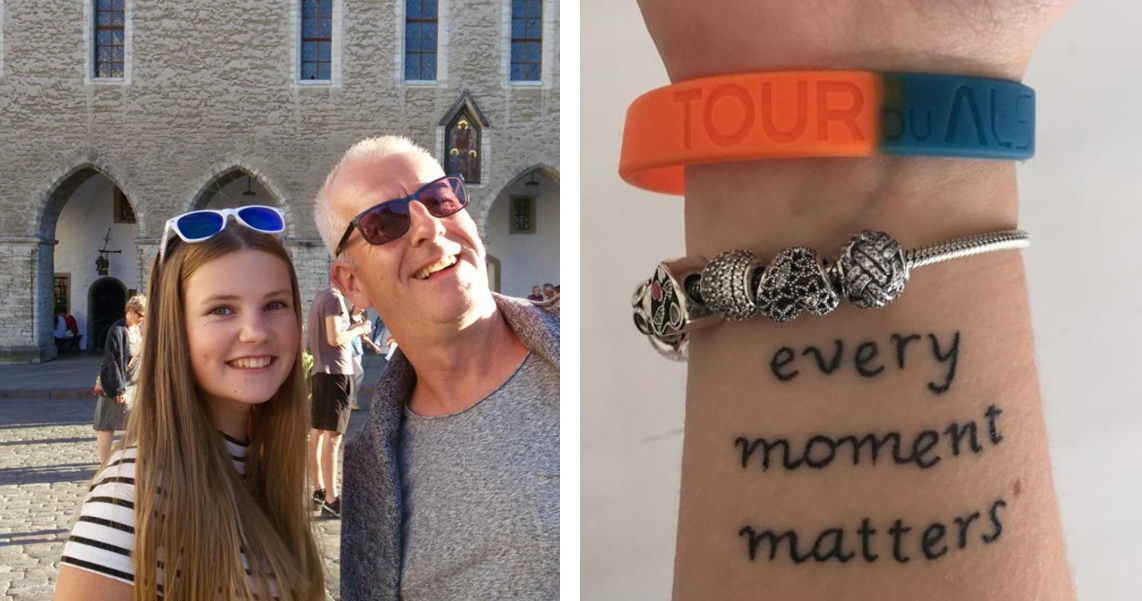 Guard of honour with singing and tears
Chris looks back with us on the first time he climbed Mont Ventoux, a little under a year after he was diagnosed with ALS. It was an incredibly hard and emotional journey. “At 500 metres before the top, Christa posts a photo in the group app saying that we’re almost there. About eighteen team members who at that point have been standing in the howling wind and cold at the mountain top for over an hour and are chilled to the bone, are just about to get into the van that will take them down. Thankfully, one of them sees Christa’s text so they stay and wait for us. Hand in hand with Christa, I stumble my last metres to the top. My team forms a guard of honour, singing and in tears. It’s the most beautiful moment, euphoric, intense, thankful and proud! Such beautiful people and such a feeling of intense happiness when I realise: I NEVER WALK ALONE.”

Money for ALS research
Shortly after his diagnosis, Chris made it his mission for the rest of his life to put ALS on the map and to raise funds for finding a cure. “For me it will be too late. But I hope that my dear Christa and all the other heroes of the Mont Ventoux will see the day that a cure for this terrible disease is found!”

Yes, I support his battle against ALS!