Tour du ALS throughout the years

The first edition of Tour du ALS took place on June 1, 2012. The 11th edition is now scheduled for Thursday, June 8, 2023. During past editions, almost 5000 participants already climbed Mont Ventoux and together they collected more than 10 million euros in the fight against ALS. Read the stories of the previous editions of Tour du ALS here.

We are still reminiscing on the 10th edition of Tour du ALS. How wonderful it was! With over 760 participants, 160 volunteers and many hundreds of supporters, we celebrated a party to never forget. Tour du ALS participants not only pulled out all stops in terms of sport this year, they also delivered a great performance in terms of fundraising. In total, almost 31,000 people donated to Tour du ALS. Support in the fight against ALS is growing and that is good news. Because the more people we get involved, the closer we get to the possibility of a solution meaning the more we can do for patients. During the ALS Family Day, the final proceeds of the anniversary edition of Tour du ALS were announced, with a record proceeds of 1,645,605 euros on the check. In ten years of the Tour du ALS, we have raised more than 10 million euros in the fight against ALS. 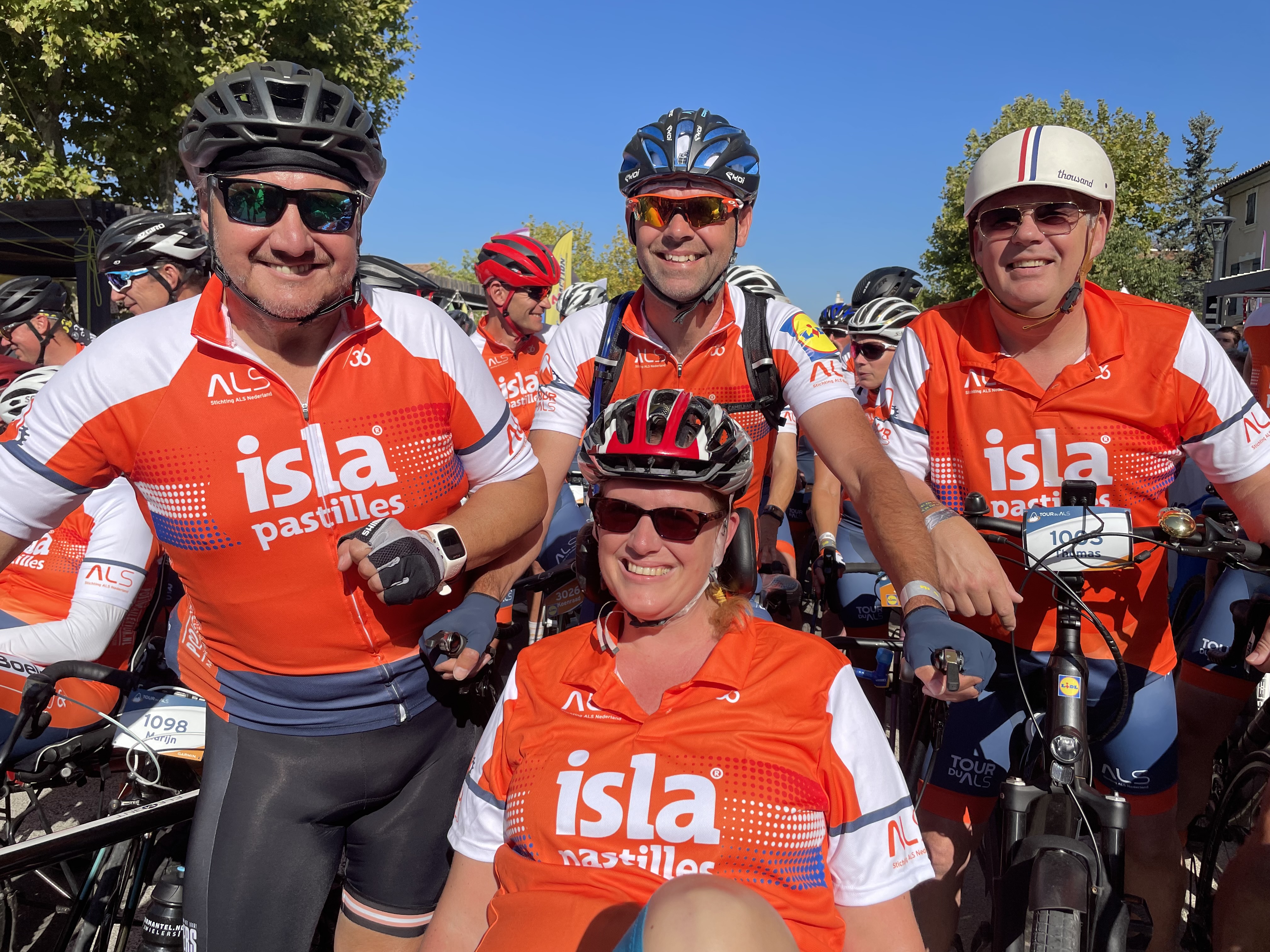 We were able to close the 9th edition of Tour du ALS with a fabulous result. About 500 participants from the Netherlands

and Belgium raised € 1,253,942 in the fight against ALS. The title of this edition was “Incredible 9” in many scenarios. The edition had a turbulent start, causing for the event to be moved twice. It has only strengthened the participants to reach the top of Mont Ventoux on Saturday September 11 and found even more people willing to support the fight against ALS.

In 2020, due to the corona pandemic Tour du ALS could not take place. The organization decided to move the sporting event to 2021. The 9th edition of Tour du ALS will take place on Saturday 11 September. Even though we couldn't travel to the south of France, we didn't just let Tour du ALS 2020 pass us by. On May 29, 2019, 'The Legendary Eight' took place. Nearly 600 participants (including 10 patients) participated. They collectively raised over €1,250,000 million! A record. The edition was also truly legendary because from Tuesday evening a storm raged over the top of Mont Ventoux at 127 km / h. But the Tour du ALS had the weatherfairies on their side, because halfway through the climb the storm died down and we were still able to reach the top!

The 7th edition of Tour du ALS was a special edition because of the enormous storm that day. Due to thunderstorms and huge downpours, the organization was unfortunately forced to adjust the routes. The more than 450 participants braved this route despite the bad weather. Fortunately, the sun showed itself again in the afternoon, so the day ended with a spectacular final party. This edition raised an amazing amount of €865,000. 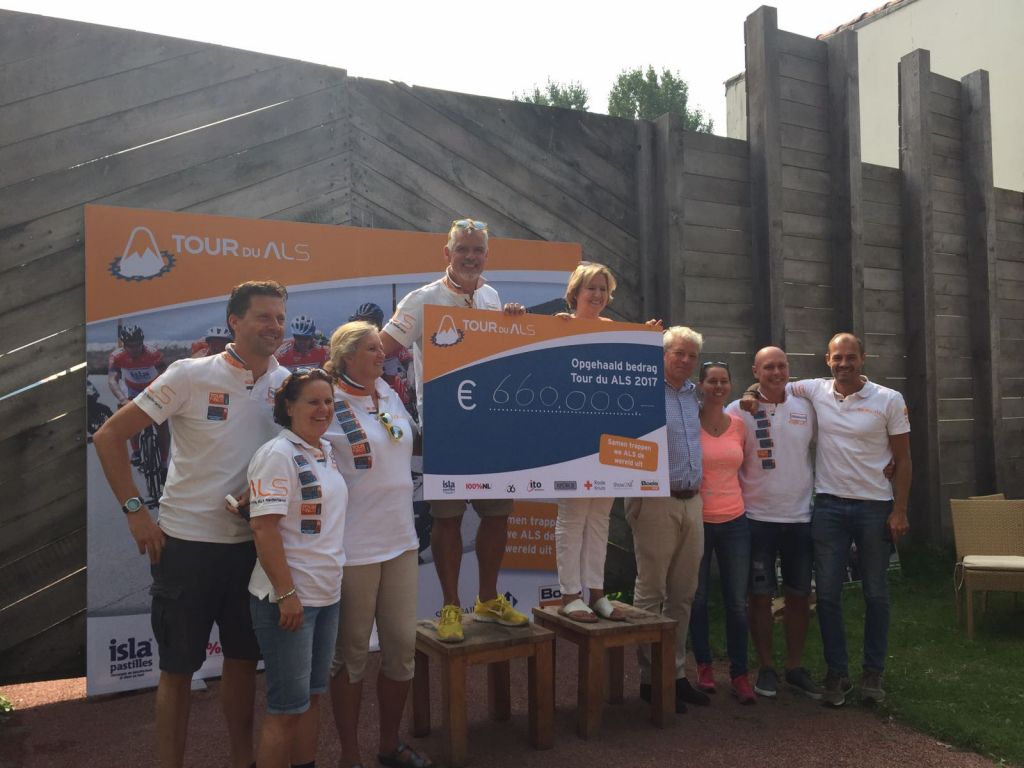 On June 8, 2017, more than 350 participants conquered Mont Ventoux in the fight against ALS. Last Saturday, the final amount was announced in Archeon. The counter of the sixth edition of Tour du ALS finally ended at €660,000. “I am proud that we can once again hand over an amazing amount to Stichting ALS Nederland,” says Gert-Jan Pijl, Tour du ALS chairman.

For the 5th edition of Tour du ALS, more than 420 participants, including 7 ALS patients, have entered the battle to conquer Mont Ventoux. After an intense climb, all participants finally reached the misty top of the mountain. During this edition, even a handbiker participated the mountainclimb for the first time. During this edition, no less than € 774,000 was collected in the fight against the merciless disease ALS. 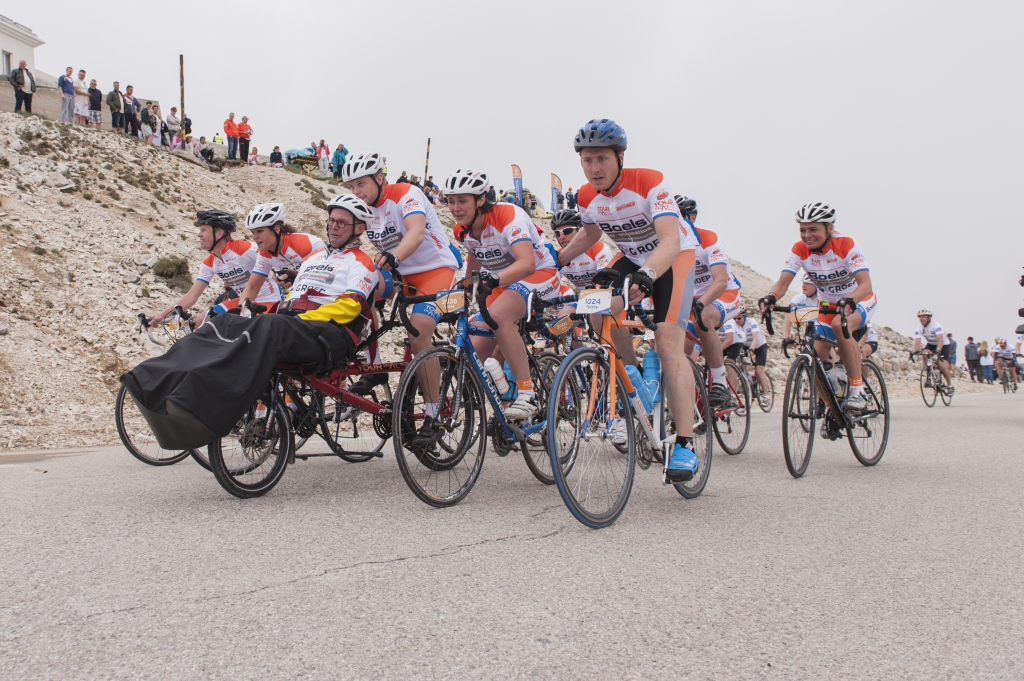 Tour du ALS “Battle on” 2015 has once again been a wonderful event! With almost 450 participants, divided over cyclists, runners and walkers, a provisional amount of no less than € 750,000 has been generated! Thanks to all participants, volunteers, partners and supporters for a great event! See you next year! Edition 2 of Tour du ALS, held on June 7, 2013, has been a great success! With a more than eightfold increase in the number of participants (from 70 to 600) compared to edition 1, Mont Ventoux was climbed on 7 June. All these participants raised at least € 1,200,000, more than ten times the amount of the previous year. An unprecedented achievement!

First edition of Tour du ALS, held on June 1, 2012, has been a great success! With the ascent of Mont Ventoux by no less than 70 riders, we raised € 109,860.75 for the ALS Netherlands Foundation in a short period of time. We have not gone unnoticed in the media either.

What was initially intended as a cycling tour in France for a private group has resulted in an annual sport fundraising event. Under the motto 'Together we kick ALS out of the world', hundreds of cyclists, runners and hikers climb Mont Ventoux every year to raise money for research into the cause and treatment of the deadly nerve/muscle disease ALS.

Read more about the origin of Tour du ALS